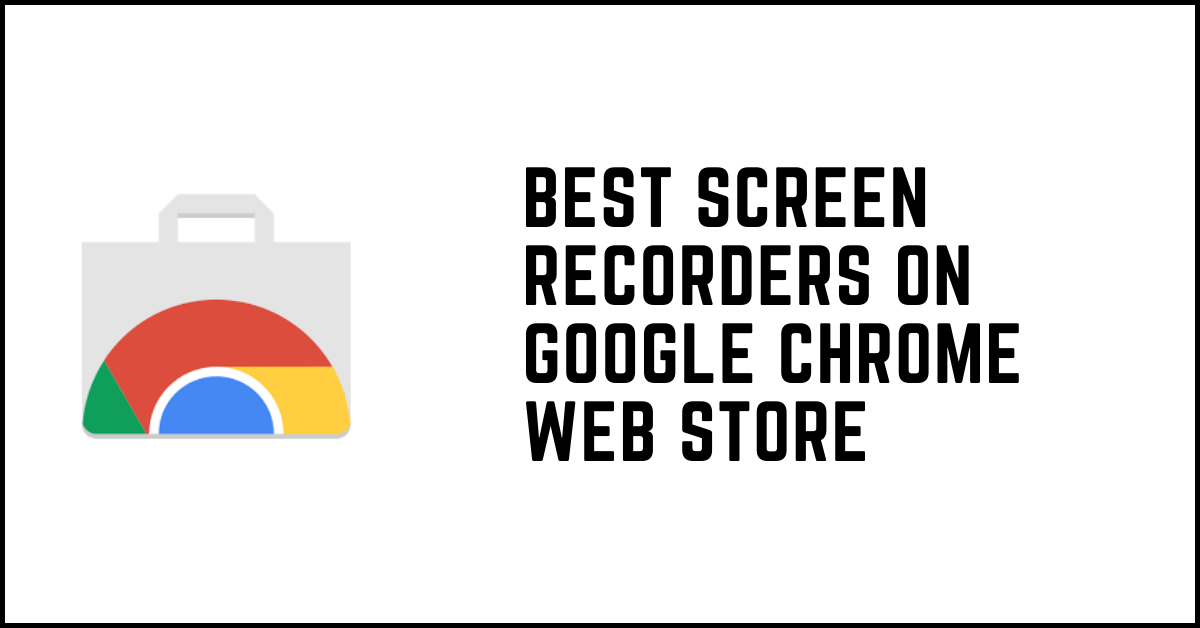 How have we categorized the top 10 screen recorder chrome extension available on the chrome web store?

How have we categorized the top 10 screen recorder chrome extension available on the chrome web store?

We have compiled the list based on a detailed feature-wise comparison, features offered in the free plan, reviews, ratings, and few more factors. We have also mentioned few other screen recorder chrome extensions which were close to making it to the top 10 list of screen recording Chrome extensions available on the chrome web store at the end of the blog.

The videos are also free from watermarks enabling them for professional use. The videos once recorded are uploaded immediately to the cloud instantly from where users can share them with anyone in a single click. The entire process of adding the plugin, recording, and then viewing the videos happens in just a few clicks making it very simple and easy to use.

Few of the features available on the free version of the Vmaker chrome extension:

Vmaker Chrome Extension: The Best Free Tool For Screen Recording Videos
We were building something very exciting in our backyard tool shed, and now we’re happy to share it with t

Awesome screenshot is one of the most popular screenshots and screen recording tools available on the chrome web store with over 2 Million users and 23,000+ reviews. One major reason behind the popularity of Awesome screenshot is that it offers users the ability to take a screen capture and also to record the screen along with a webcam. Users do not have to worry about installing another extension for taking screenshots. Another useful feature is that users can decide to save the video/screenshot to the cloud or to their local device.

One good thing about the free plan is that Awesome screenshot enables users to have access to their pro version for the first 20 videos. Basically, users can use all the pro features including 4K recording, unlimited recording, screen annotations, MP4 downloading, and a few more. This allows users a fair chance to evaluate the toll before deciding to upgrade or not. Users can also continue to save videos and screenshots to their devices for free of course with the recording limit.

Few of the features available on the free version of Awesome screenshot chrome extension:

Additional features offered in paid plans(Professional and above):

To conclude Awesome screenshot is an incredible tool for users to take screenshots and screen recordings. However, the free plan comes with a lot of limitations and the paid plan doesn’t warranty investment as it still misses a lot of features including a video editor which is a bare minimum feature in order to upgrade.

Screencastify is the most installed screen recording Chrome extension with over 1 million-plus installation. Screencastify has been widely used by so many users with education as one of its primary use cases. Screencastify offers users an easy way to record videos and quickly edit and share them across all from the comfort of a single tool. The tool is integrated with google drive and users can decide to upload their videos to their google drive. Users can also locally save them in MP4, MP3(audio only), and GIF formats.

Screencastify over the years have altered their plans and features. Currently, the only difference between the free version and the paid version is that the paid version offers unlimited recording without any limit. This means that users can do pretty much everything except for recording for more than five minutes.

To conclude Screencastify offers great value for free users if you don’t have the requirement of recording more than five minutes as it offers almost everything in the free version. However, a user cannot decide whether or not they want to record more than five minutes beforehand. The paid plan also doesn’t offer cloud storage and you might have to make space in your google drive or your drive. There is also no 4K HD recording possible as well.

Check Out Vmaker: The Number One Screencastify Alternative

Ever since launching on product hunt, Loom has gone on to be one of the most popular screen recording tools out there in the market. Loom revolutionized the online screen recording model that was quick to record, easy to share, and collaborate. Ever since gaining popularity Loom has updated their plans and pricing and have now moved a lot of features into their paid plans and have also capped the recording duration to 5 mins for free users.

Loom users can record as many videos and screenshots as they want but only the first 100 will be available in the workspace. To access the older videos users will need to upgrade. The free version offers few exciting features including emoji reactions in the player, viewer insights, restricted viewing, and much more.

Paid plan users unlock a sea of options including custom branding, custom CTA, Thumbnail, ability to record at 4K for an unlimited duration, password-protected videos, and engagement insights making it a complete all in all solution.

Additional features offered in the paid plans(Business plan and above):

Loom offers a wide range of features and could be a good investment but again for free users the five minutes limit is a real killer blow.

Check Out Vmaker: The Number One Loom Alternative

Nimbus capture is another Google Chrome extension screen capture and screen recording tool. Nimbus just like Awesome screenshot has the ability to take both screenshots and record videos which slightly gives an edge. Nimbus have strongly positioned as an alternative to Awesome screenshot.

The free plan lets users record videos and screenshots with a wide range of features and annotation tools. The videos are by default stored in WebM format and you can share the link with anyone for them to view. The screen annotations are quite robust allowing users to add an image, shape, lines, text, blur, and much more.

The Nimbus capture combo plan with notes allows users to use both the paid versions of Nimbus offerings together. The free version of Nimbus is quite handy with a lot of useful features. If downloading is not a concern for you then nimbus could be a very useful screen recording and screenshots chrome extension for you.

The recorder allows users to record screen, webcam, or both and are quite generous with regards to the time limit in the free plan as they allow free users to record upto one hour. There is also no cap on the number of videos uploaded, recorded, or hosted.

The paid plans start at 15$ per month and allow users to remove Vidyard branding, make customization, add CTA, and much more. Vidyard also offers teams plan which is quite expensive but has quite a lot of features in them.

The free plan comes with certain advantages of no cap on the number of videos, free from watermark and cloud hosting but Vidyard doesn’t let the users download the video and also have a one-hour recording limit making it not suitable for recording long meetings and presentations. The team’s plan has great features but is priced heavily which isn’t economical for most of the users.

Vimeo record is the latest screen and webcam recording google chrome extension from Vimeo, one of the most popular video hosting platforms. Vimeo record allows users to record videos and the videos are uploaded to the cloud instantly from where users can decide whether to keep the videos private, public or accessible only to teammates. Users can also customize their video player, embed videos, and do a lot more.

Vimeo has been industry leaders in the video space and have forayed into the video recording arena. However, the recorder has a lot of key features missing, users cannot record system audio, increase the size of the webcam bubble, there’s no option to annotate on the screen while recording and most importantly there isn’t a video editor even in the paid plans. If you are an existing Vimeo user it makes total sense to switch to Vimeo record as it will integrate seamlessly with your current setup. But if you’re looking for a solid screen recorder then you might have to look elsewhere, the ones above in the list could offer you better options.

The use case-based features are one of the key features of Hippo videos, if you’re a marketer you can ask for customer testimonials, track analytics, and much more. Similarly, if you’re into sales then you can send video outreaches and follow up from the hippo videos dashboard itself.

Hippo video, however, comes with just a two-day trial and then users will be moved to the forever free plan which has a five-minute recording limit.

Hippo videos is a very good tool if you want to use it for a particular use case-based model like marketing, sales, and support but the app offers very limited features beyond the two-day trial making it not a direct screen recording solution for everyday usage.

Not to be confused with the functionality but Screen Recorder by scre.io is the name of one of the most popular screen recording extensions on the chrome web store. Screen Recorder is the only extension that’s completely free. Users can record for as long as they want without any watermarks or restrictions.

The recordings are saved as a WebM file and you need to save your recording and convert it to MP4 for further use as the extension doesn’t convert the recording automatically. Users can optimize the WebM file so that they can scroll through the seek bar. This is an additional functionality as generally, WebM players don’t allow you to navigate through the video.

The best thing about Screen recorder is that it doesn’t require any sign-in/sign up, works offline, and doesn’t upload the video to the cloud. So if you’re concerned about security issues and privacy you can use this extension without worry.

Few of the features available on screen recorder from scre.io

Fluvid Screen Recorder is the last one in our list of Screen recording chrome extensions. Just like the others in the list fluvid too has a very huge user base with more than 1,00,000+ users who have so far created 1.5M+ videos.

Fluvid free plan lets users record 50 videos with a recording limit of 60 minutes without any watermarks. Users can choose freely to record screen, camera, or both. Users can also additionally set the video to be public, private and give limited access. One added advantage about Fluvid is that it offers live streaming and streaming recording functionality as well.

The pro plans allows unlimited recording and streaming along with various other features including annotations, CTA, social sharing, advanced analytics, video analytics, and much more.

Next Read: The Ultimate Guide to Screen Recorder

Fluvid is a very handy screen recorder and is quite cost-effective. The free plan does the job mostly but has a duration limit and also doesn’t allow social sharing of your recordings.

The chrome extensions listed above offer a variety of features and suit different use cases. Do choose the one that rightly fits your needs. Few other screen recording chrome extensions that were close to making the list are listed below.

Do leave a comment if we missed any screen recording chrome extension and we’ll have a look.

Few other listicles that will help you decide on the best screen recorder: