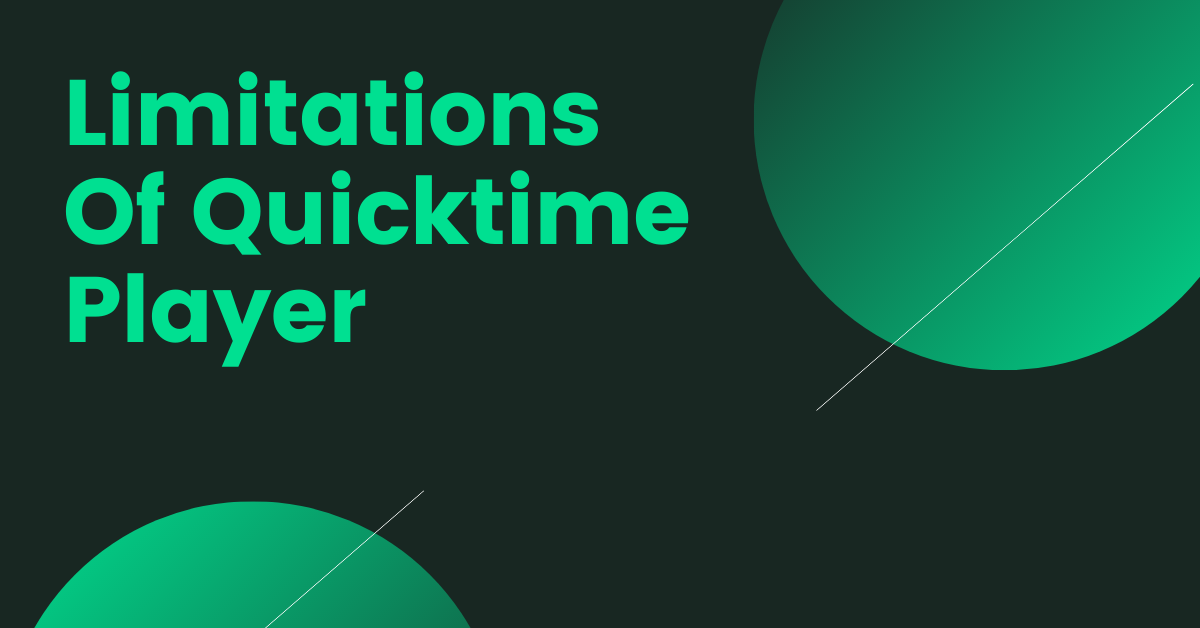 Here are some limitations of Quick Time player that make you look elsewhere for a screen recorder tool.

Let’s be honest we all love Apple’s Mac it is sleeky comes with tons of features, has a great shelf life and most importantly it’s made by APPLE Inc one of the if not the best companies to produce a laptop. As of 2018 there are 100 million active Mac users in the world and the mac OS has a 17% market share as of July 2020 the numbers show how much the users love using Mac.

But all good things might still have a few disadvantages and Mac too has one area that needs improvement but sadly hasn’t been looked at is the screen recording functionality in the mac for some time forcing us to look elsewhere. Yes, you’re right I’m talking about the Quick time player.

If you’re on the latest versions of Mac, there’s a separate app in Mac called screenshot for recording and capturing screen but it offers the same functionality as of Quick time player with the same features except for the fact that you can start screenshots with a keyboard short cut.

As the name suggests Quick time player/Screenshots is majorly a video/audio player that has screen recording functionality. Quick time player lets you record or capture screen on Mac but lags without many important features.

Here are some limitations of Quick Time player that make you look elsewhere for a screen recorder tool.

3. Only one format to export your recordings

Apple restricts the ability to export videos in multiple formats in fact the only format available for export is .mov. A format that works exclusively with Quick time player.  If you’re looking to upload your video elsewhere in popular formats like .mp4, .wmv, .mkvs then there is the unnecessary step to convert the video to the format of your choice which sometimes hampers the quality of videos.

Also, the file sizes are generally huge with a 10 min recording at the max recording of 1080P coming out to around half a GB which again occupies a lot of unnecessary disk space on your Mac. Most of the online video format converters restrict the file size if you’re using a free version and this again is a big disadvantage!

4. Recordings are stored locally and not on cloud

The recordings made on Quick time player or screenshots are saved locally and not on the cloud means the recordings are available on only one device. If you need to share it with anyone else there is the need to upload it each and every time and the huge file size makes it a tough job to share.

5. No ability to capture system audio

This is one of the essential features that’s needed in a screen recording tool and Mac doesn’t offer it. Both the recording tools on mac do not come with the ability to capture the system audio or internal audio while you record. If you’re attending a meeting and recording the same, you’ll not be able to capture what the others in the meeting or conversing. Similarly for other cases including gameplay recording and other instances.

This limitation rules out the ability to record tutorial videos, Product tours using the native screen recording tool on the Mac. If you have to record audio as well you’ll need to install another application like sunflower which again makes the simple process of recording your screen unnecessarily complicated.

6. No cool features to make the recordings engaging

Mac offers just the mouse emphasis feature which also isn’t completely useful as you’ll not be able to differentiate which part of the screen is being clicked exactly which is again a massive letdown.

There’s no screen annotation feature available as well so this again makes the recording flat and boring. If you’re looking to create engaging videos then Quick time player or screenshots both are simply not the ideal fit!

Not just these drawbacks the existing features seem to be not performing well with a lot of users complaining about the same in support forums. Here are a few of those listed below.

To sum up the built-in screen recording tools on Mac are decent tools to record or capture anything for personal use. But it’s nowhere near a good solution if you’re a heavy user and looking to use it for professional use. A good screen recorder should allow dual recording with tools like mouse emphasis, screen blur out, screen annotations to make the recording engaging.

Check out Vmaker that lets you record unlimited number of videos and stores your recording on the cloud forever. Not just that you can record screen, camera, or both as you wish along with cool features that enable you to make your recording look cooler.

How to record your screen on Mac with audio using Vmaker

How to Record Your Computer Screen With Audio